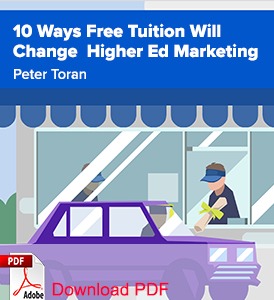 When Socrates taught Plato and other wealthy Athenians, he refused payment, a position that didn’t sit too well with Xanthippe, his wife. After all, there were bills to pay and a family to raise.

Fast forward two and a half millennia, and free public education is in the news, proving once again that there’s nothing new under the sun since the Greeks.

The issue of tuition-free college is a central topic for the 2020 Democratic presidential hopefuls, with most candidates supporting some version of free college. It’s important to note that “free college” is a broad term that’s used to reference an array of ideas aimed at reducing the cost of attendance and student debt, all $1.5 trillion of it. Also worthy of mention: this is not a new idea or an untested one, as close to 20 states already have some tuition-free plans in place.

There are other variations as well, some of them with significant policy implications, including household income requirements, admission criteria and minimal college GPA requirements. Given all of these moving parts, one thing won’t change: How to “pay” for college will remain a complex maze, especially for first-generation students. But details aside, what would free college mean to higher education marketing, which often focuses on—for better or worse—“return on investment?”

In a tribute to David Letterman, here’s a Top Ten List of what a tuition-free-public-higher-education-future might hold for college recruitment and marketing.

10. “Investment” will take on a new meaning.

Instead of focusing on cost, we’ll focus on time, or more specifically, what economists call opportunity cost. What else could a student be doing instead of going to college? If you don’t have a plan of how your degree will advance your career, are you better off entering the workforce? With cost no longer an obstacle, recruiters and marketers are likely to focus even more on the value of a college degree and why it’s worth the time and effort.

9. Retention and graduation rates will be even more critical.

If students don’t pay tuition, will they be motivated to succeed? Opponents of free college often cite the lack of “skin in the game” as a primaryconcern, and it’s a valid point. On the other hand, free college is likely to reduce the number of students who currently work while in school. The U.S. Census Bureau estimates that  72 percent of undergraduates work, with 25 percent working full time. Institutions that can boast high retention, progression and graduation rates will be able to deal with that argument head-on and attract students—and the funding that accompanies them.

The incentive to enhance retention and graduation rates may force institutions to do a better job with today’s college population of diverse, working students: only 58 percent of students who entered college in 2012 graduated six years later.

If the recent college admissions scandal teaches us anything, it’s that, when it comes to getting Suzie or Billy into a prestigious school, the sky’s the limit for those at the top. On a more positive note, there’s a movement among elite institutions to use their significant endowments to increase access to low-income populations. While those caught in the middle may get squeezed out, the institutions themselves will remain secure.

Smaller schools with less impressive endowments won’t be so lucky. We see their struggles already, as shifting demographics have caused some institutions to close and others to seek strategic partnerships. In 2017-18, the tuition discount rate for first-time, full-time first-year students at private colleges and universities topped 50 percent, and the number is predicted to be even higher this year. It’s difficult to see how that trend is sustainable for private institutions that lack large endowments: Continuing to increase tuition to pay for more discounting threatens to price colleges right out of existence.

In a valiant effort to save his alma mater, filmmaker and Hampshire College graduate Ken Burns is co-chairing a committee to raise $20 million this year and up to $100 million in five years. Hopefully, his experience securing funding for documentaries can translate to higher education. For the record, Hampshire’s fall 2019 freshman class will be 15 students.

6. The focus of community colleges may shift.

Assuming that free college extends to both two- and four-year public institutions, the profile of the community college population will change. Currently, close to half of all undergraduate students begin their college careers at two-year institutions. With average tuition at community colleges approximately one-third the tuition of four-year schools, that’s not surprising.

If the federal government can erase the tuition differential, it’s logical to assume that more students will begin their careers at four-year schools and community colleges will increase  their focus on workforce development and adult education.

With the most recent estimates of average student loan debt ranging from $26,900 to $39,900, depending on the type of institution, it’s not surprising that traditional liberal arts majors are under siege.

Small wonder, too, that U.S. News now produces yet another “best of” list: “10 College Majors With the Best Starting Salaries.” Most telling is the list’s subtitle: “Get the Most Out of a College Degree.” The irony of that title is lost on the publisher: 9 of the ten majors are different types of engineering. Want to guess the tenth? It’s a tie between mathematics and computer science. Sorry if you were betting on philosophy.

The implication: If you’re not mathematically or scientifically inclined, you won’t be getting “the most” out of your degree. The truth is, not everyone was born to be an engineer and no amount of starting salary is going to change that.

Free college could alter the landscape, as students may feel less pressure to abandon their true passion in the face of mounting debt. Call it Socrates’ Revenge.

4. There will be fewer food fights and infinity pools.

Public funding of free college will cause increased scrutiny of spending. That could translate to a reduced focus on student amenities, which are funded by the sometimes mysterious “student fee” part of the equation. As a result, haute cuisine dining halls and lazy rivers that “will transform your dullest day into a vacation, with … resort quality facilities and atmosphere that will unwind you, even with the most stressful of schedules,” will become things of the past. And yes, that’s a direct quote.

With little-to-no undergraduate debt, students who previously couldn’t afford graduate school may seek new opportunities once thought beyond their reach. There’s also the potential for credential inflation: If free college is a success and more people obtain four-year degrees, demand may increase for advanced degrees, just as the B.A. has replaced a high school diploma for many employers.

2. Rankings will change and lose their luster.

The U.S. News focus on dollars and cents should come as no surprise to anyone familiar with the magazine’s ranking criteria: 35 percent of the indicators are finance-related. Without the exact details of a free college plan, it’s too early to know precisely how those financial metrics will change, but some change is inevitable. Additionally, metrics concerning student selectivity, student “quality” and acceptance rates will likely be impacted if more students attend public institutions. And “best value” rankings? As discussed above, “value” will no longer be synonymous with purchase price.

Whether this development is good or bad is a topic for another piece, but recruitment strategies solely based on rankings will be less influential if and when U.S. public education becomes more egalitarian.

1. Mission, vision and values will matter.

Yes, students will still be attracted to schools with the best reputations, but reputation is a fragile construct, especially when “investment” and “value” can’t be so easily expressed. Students will continue to seek an education that will prepare them for the world of work, but free college might alter the mindset noted by Pace University President Marvin Krislov: “Many Americans think a college degree should be a ticket to a specific job—the cheaper the ticket, the better.” And a refocusing on mission could benefit the 42 percent of students who don’t graduate in six years, since no university comes to mind with a mission to graduate 58 percent of its population. Maybe it’s time for a comprehensive, coordinated public education mission and system.

Recently, I remembered the importance of mission while working with an idfive client to (what else?) increase enrollment. The institution has a new president, and amid the usual talk about strategies and tactics, he shifted the discussion to mission, vision and values. What was the institution’s purpose? What is the vision? What will success look like for students and graduates, not solely the financial bottom line? In the middle of the all-too-familiar “butts in seats” panic, it was refreshing to see a leader with the right priorities. It’s why we work with brands on a mission.

There’s also inspiration to be found in success stories like Berea College, a private liberal arts college that has been offering tuition-free education since 1855. Although every institution claims to be “unique”—a word I know makes marketers shudder—Berea has some claim to that distinction. It was an early leader in providing educational opportunities to women and people of color, is one of nine federally-designated work colleges, and has remained committed to its Southern Appalachian community. Given its history, it’s no surprise that Berea’s messaging focuses on the impact its mission and values have on students.

Before we get too carried away, let’s remember that the winds of change can often change direction, or stop altogether. The ultimate thanks Socrates got for his volunteer work was a glass of poison hemlock, which he was forced to drink in front of his students, no less.

Whether free college happens or not, college recruiters and marketers may benefit from focusing on the real value proposition of higher education. And for that, we go back to Socrates: “The unexamined life is not worth living.”

Not even with lobster tails and a waterfall.

Peter is unequivocally the coolest person in the office. Having served in university leadership and on executive boards, Peter has a lot of experience in a lot of areas. And he helps gain our clients’ trust and support from Day One. Peter is also an expert on enrollment and content strategy and institutional branding and communications. There’s nothing this guy can’t do, but he’s exceptionally good at bringing us artisanal bread on Friday’s paired with well-baked puns.