Ah, the Super Bowl, the most exciting time of year for those in advertising, and those who enjoy critiquing creative from their couch (i.e. everyone).

This year’s line-up of spots was heavy with celebrity endorsements and included all of the brands you come to expect to show up during the big game. Junk food, soda, automobiles, and… politics? Maybe there were a few surprises we didn’t see coming after all.

We asked around the agency and compiled a list of the winners, losers, and most memorable ads that got us talking this year. Take a look at the responses.

This ad may have appealed to the largest audience segment of all the big game ads. Casting all Americans in a positive light during arguably one of the most American events of the year really connected with many fivers in the office. As Senior Content Strategist & Producer, Jake Solyst put it, “Budweiser’s ‘Typical American’ ad got me good. Patriotism is hard to do right, but this ad pulled it off by subverting a disparaging phrase in a clever way. It backed up the message with real life YouTube clips, which is always fun to watch. We need these positive reflections on culture.”

A more playful fan favorite was the Doritos spot that mixed iconic Westerns with the topical “Old Town Road.” It has really been the year of Lil Nas X. His unlikely genre-bending success ultimately grew on me over time, because he’s just so likable. The celebrity and brand match-up felt very appropriate for this fun ad. Extra points for Sam Elliot, the forever cowboy.

Another widely well-received spot was also the most timely. Bill Murray’s groundhog day spot for Jeep was another perfect celebrity and brand pairing. Recreating the iconic movie on groundhog day gave us a good laugh and actually managed to capture the joy of driving a Jeep.

While some found the Snickers ad amusing and liked how it played on the brand’s existing messaging/branding (the “you’re not yourself” ads), others felt the dots did not connect and that the ad was a bit overproduced.

Bud Light, First Ad #Postystore
Personally, I enjoyed Post Malone for Bud Light Seltzer, even though my pick of the two ads ultimately was not aired. (See Bud Light, Second Ad.) I thought the Pixar’s-Inside-Out-style internal personifications with his face tattoos was a funny execution. Others were not so inclined to go drink a Bud Light seltzer.

While it seemed that everyone had a different least-favorite ad, we could mostly agree that political ads were best left out of this joyful occasion.

Planter’s Peanuts
An ad that generally left us feeling “what did I just watch” was the Planter’s Mr. Peanuts funeral. Senior Copywriter, Alan Carl says it best, “I think Planters WAY overestimated how much anyone cares about Mr. Peanut. Plus, death isn’t a great way to make me want to eat peanuts. Plus, plus, the Baby Peanut just seemed pointless (and a cynical attempt to make people go “how cute!”).”

A spot that at least garnered some strong feelings albeit feelings of disappointment, was the Jonah Hill/Martin Scorsese spot. AVP of Creative Strategy, Matt McDermott felt that “They have all that comedic kinetic energy stored up, and they let it eke out like a fart in church. I joked that I was going to spite-drink a sixer of Pepsi after watching that spot. Pepsi found that adorable.” See the twitter exchange below for the receipts. 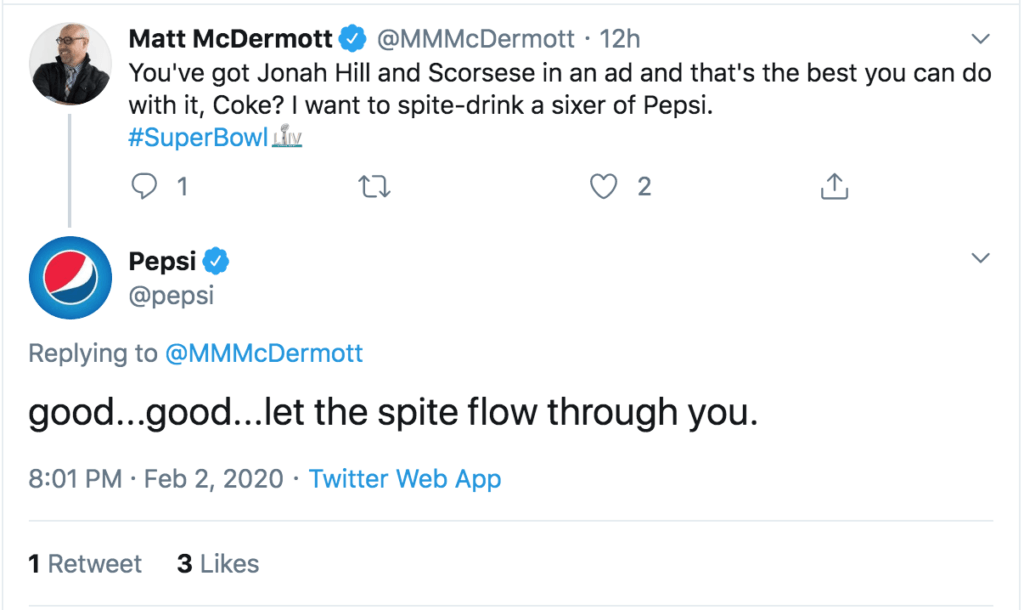 The Google ad just about ripped my heart out, so I would call this one the most memorable. Sad ads are not always a huge hit at parties, but I think this one really hit everyone in the feels. Some called it annoyingly effective, while Account Executive, Samantha Eckles described an extremely emotional response from her and her family. “It played at the emotions so hard, really grabbing onto something that everyone in the world can relate to – a loss of a loved one. The best part of this ad is that they take the loss of a loved one and make it into a beautiful remembrance.”

Art Director, Courtney Glancy pointed out, “We often bemoan the way technology is taking over our lives and creating a sense of disconnection, but this was a nice reminder that we can also use it to stay truly connected to real people.”

Turbo Tax was actually our guilty pleasure of the evening. Who would have thought? The goofy humor of the knee knocking dance (that they’re calling the W2 Step) definitely stuck out. It was so weird and so simple and we couldn’t look away.

Memorable Mention: Proctor and Gamble for packing in SO many different recognizable ad campaigns.

The Game Goes On

Regardless of if your favorite part of the game was the commercials, the game itself, or the half-time show, you will soon be inundated with memes referencing all of the above.

Media platforms will now be flooded with new content for the foreseeable future, and I secretly love it.