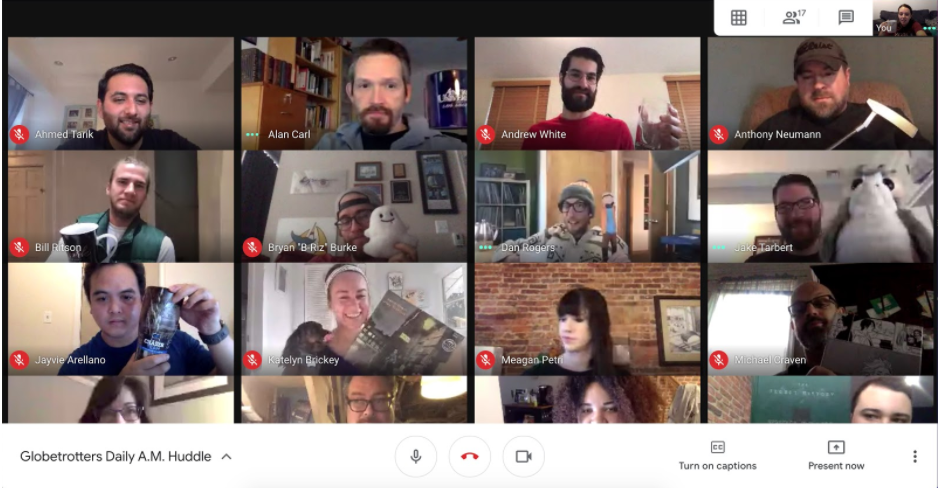 “I had no idea so many people had vinyl record collections!”

This isn’t something you hear in the office every day. But it’s something we’ve recently learned about a lot of Fivers during a team building activity.

During a weekly team meeting, our team decided to spice things up from the now standard COVID-19 “Zoom happy hour” and play what can only be described as a clutter scavenger hunt. It allowed everyone to get up, move around, and boosted the time with some friendly competition.

We kept the game a secret until everyone was on the call and used Google’s Jamboard to provide a list of categories at the beginning of the meeting, and then added additional frames for score keeping and screenshots of the best items. Everyone had five minutes to search their home and gather as many items they could from the list of categories including: family photos, empty bottles, pieces of mail, or something that was going to be  thrown out.

After a mad scramble for items and a competitive tally, our winner had 16 items piled up next to her. The fun of the hunt  was seeing what objects Fivers could grab, and the conversations that followed.

Multiple team members grabbed various Harry Potter books, but nobody grabbed the same volume. The DVD cases allowed us to step back in time (slightly) and argue whether buying the Blu-ray really was worth it. And contemplating whether bribing your child to stand in the video for two seconds counts, or if the kid had to be independently willing to be in the video for the point to count.

Everyone had a chance to speak and share their objects, and in turn we all learned a little bit more about each other. Of course, we all speak in the office, grabbing a coffee in the kitchen between meetings, but now more than ever these few moments of connection and conversation allow us to come together.

For many, this is our first time working from home full-time. That comes with a set of challenges, but in this case, working from home allowed us to show off pieces of our personality that may not shine through at the office.

We all know team building is important, but now more than ever people could use a reminder that they’re connected and integral to idfive’s culture. This activity was a perfect reminder of that, plus it gave us a chance to show off our favorite clutter in the process.