Empowering communities to discuss, assess, and take actions to improve resilience to disasters.

The Composite of Post Event Well-Being (COPEWELL) project — part of the Johns Hopkins Center for Public Health Preparedness — uses an evidenced-based approach to help communities improve their resilience to disasters. For the project to be successful, complex data had to be presented in an accessible format to a broad audience with varied expertise.

When you’re tasked with a data visualization project, it’s tempting to go the bells and whistles route and produce a complicated, impressive looking, but ultimately useless tool. Instead, the idfive team focused on function. In researching our primary audience — government agencies and departments at the township, city, or county level — it was clear that the majority of end-users would not have a background in disaster research or system dynamics. So, even though we were dealing exclusively with data, we had to make the raw numbers secondary to what those numbers meant.

Whenever possible, we provided context, anticipated questions, and connected results with actionable next steps. For example:

It was equally important to describe and label the data so that it was easily understandable, including definitions where appropriate.

Complex data sets were presented in clear categories — model inputs and model outputs — with domains and definitions supplied for each category.

See the tool in action.

I loved getting in the weeds of how this tool worked, particularly on something where the potential impact is so significant. The interactivity is the ‘wow’ factor, helping policymakers make decisions to improve our lives.

The idfive development team wrote a data processing application that does a minimum of 496,436 calculations ahead of time, so those values aren’t calculated every time a new user loads the page. The application then assigns the proper color value to every data point inside of every census area. 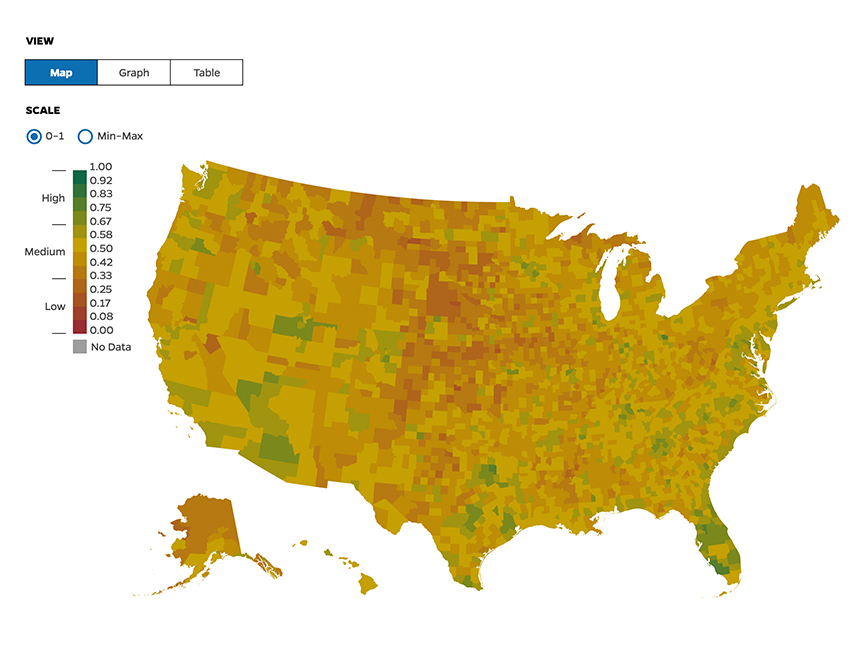 Design also focused on function and usability. Color provided context for the model inputs and outputs, with a corresponding scale clarifying what was a “high” (good) or “low” (bad) score.

An accessible tool puts the power of data into the hands of community leaders and policymakers to improve community functioning and resilience to disasters.

There’s amazing potential for good in the world. Let’s give it a chance and a voice.
You in?
Join our team Hire Us